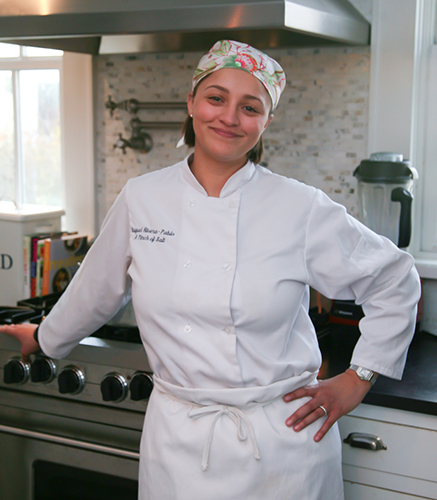 Chef Raquel Rivera is the owner of A Pinch of Salt  in Black Rock, CT. As the eldest of seven children, Chef Raquel had her share of responsibility. Making “dinner” for the family meant mac and cheese from a box. It was only after graduating from Fordham University Chef Raquel realized the importance of cooking from scratch at home for herself and others. Discovering a true passion, Chef Raquel began preparing countless recipes from popular cooking shows and ultimately enrolled in culinary school. Chef Raquel graduated with highest honors from The Institute of Culinary Education (ICE) after completing her externship at the renowned Le Bernardin in 2008. Visit for more information on her business.

In 2010, Chef Raquel was recognized for her volunteer work with City Harvest and attended the launch of Mrs. Obama’s Let’s Move! campaign at the White House. Soon after, Chef Raquel joined Wellness in the Schools where she taught cooking and nutrition classes and later became the lead chef instructor at the West Side Campaign Against Hunger.  After relocating to CT, Chef Raquel has become fully engaged in her Bridgeport community and is known for her cooking education focused on healthy, clean cooking.